Who hasn't heard of coral bleaching? To thrive, corals require a water temperature typical of tropical seas, a range of salinity typical of the sea where they live, clear water, low sedimentation rates, and low nutrient levels in the water.

The third largest barrier reef in the world is growing in Florida, from west of Key West to Stuart in the north. It is presently under severe stress, and a special workgroup has been created for coral reef conservation (SEFCRI).

Two important threats to the coral reefs appear to be siltation from beach nourishment, and eutrophication from sewage. The SediMeter™ can be used to monitor silation on coral reefs.

Temperature: Corals require a certain range of temperatures. Permanently exceeding that range will kill them. Corals in different regions have slightly different thresholds.

Salinity: Corals require sea water and are killed by brackish water. Thus they cannot grow near river mouths, where the inflowing fresh water tends to spread out along the surface. They can also be stressed by too high levels of salinity caused by excessive evaporation.

Physical: Divers, anchors, and ships running aground physically break off pieces of coral, as do hurricanes. Some criminals also steal pieces of corals to sell to aquarium owners. If this destruction exceeds the growth rate the reef biotope will completely change.

Surrounding sediments are already rather devoid of fines, as they have been washed out, but if sediment from another environment, with less wave action, is deposited near a coral reef, then the waves will start to wash out the fines and bring them in suspension towards deeper water. There are ample observations to suggest that this is how many of Florida's coastal reefs died. Only one coastal reef is still alive. Coral reef siltation monitoring could provide protection for reefs and save them from this destiny.

Nutrient levels: Oligotrophic water is another requirement. If nutrient levels are increased, known as eutrophication, then algae start growing. They overgrow and kill the corals. Algae (seaweed) absorb nutrients from the water, but corals recycle them internally. Even higher nutrient levels can lead to algal blooms (planktonic algae), which leads to light attenuation and sedimentation on the corals, and thus harm them by muddying the water. The limiting nutrient is N, nitrogen in a bioaccessible form. At present tens of tons of total N from sewage without tertiary treatment is spewed out every day in the coral reef tract in southeastern Florida. The future plan for Miami calls for increasing this (source: FDEP Ocean Outfall Study, 2006).

Sea-level: Reef-building corals need to be near the surface where there is light, but not above the mean sea level. Large and sudden sea-level changes, such as those that happened when the ice age ended, will change the reef biotopes. Florida has three bands of reefs at different depths originally created during different sea levels. 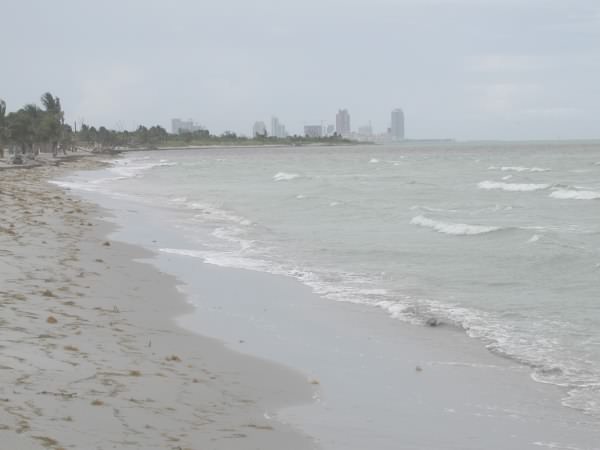 Resuspension event at the restored beach of Key Biscayne, Miami-Dade, Florida. During tropical storms the water gets turbid, which causes siltation on the reef.