It's impossible to dredge without spilling some part of the sediment into the water. Sediment spill may negatively affect the biota. Benthic filtering organisms are sensitive for sediment accumulation and elevated near-bed sediment concentrations. Benthic primary producers are negatively affected by a decrease in incident light caused by suspended sediment in the water column, while pelagic organisms may be directly harmed by it.

Dredging spill causes siltation: high near-bed turbidity, and sediment accumulation on the bottom (potentially followed by resuspension), all of which may be measured using a SediMeter. No other instrument currently on the market (2014) can do this. The SediMeter can be used as a stand-alone logger or a real-time sensor. 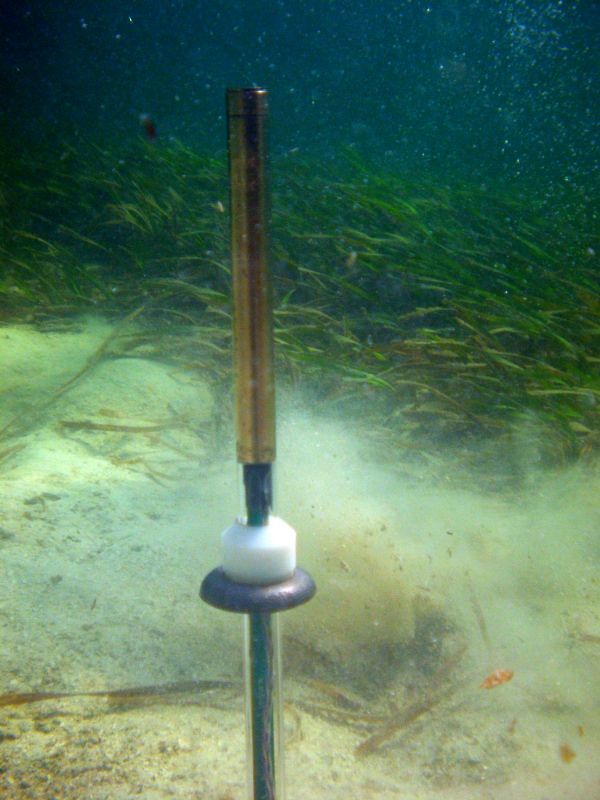 This example illustrates how SediMeter monitoring can optimize both the environmental protection and the overall project economy. The project involves dredging on a sand bottom and transporting the material to a beach. All bottoms around the site are sand, except the coral reef and seagrass bed indicated in red and green, respectively, on the map. There is also a navigational channel. Siltation is only a concern in those three areas. SediMeters with optional light sensors are placed strategically so that the siltation can be estimated using kriging in all areas of concern. There is also a current meter so the delay and direction from spill to impact may be estimated. This system creates objective data, and it ignores spill that is harmless by falling on non-sensitive bottoms. Compared to the default method of measuring the spill plume it can give objective data at a fraction of the cost (point measurements "in the center of the spill plume" are not objective and should not be accepted in open waters, although they are adequate in rivers). The SediMeters measure sedimentation, sediment accumulation, sediment deposition, siltation, and also resuspension, erosion, and scour. The instrument is ideally suited for monitoring spill and sedimentation from dredging operations.

Building activities, dredging, and other construction activities in or near water may bring sediment into suspension. While in suspension, sediments can be transported by currents to sensitive biotopes. Eventually the suspended sediment will settle to the bottom. It may accumulate permanently, or get re-suspended at a later time. Coarser fractions may get transported further as bed load.

Most bottom-dwelling organisms have a limited tolerance to these processes. To protect the environment the spill must therefore be limited. Monitoring is necessary in order to supervise the compliance with the permit.

In certain cases, sediment spill may cause sediment accumulation in navigation channels. New construction may also have negative side effects in the form of erosion, or scour, in neighboring areas. These negative effects for other stakeholders may not be fully known until long after the project is terminated. Long-term monitoring may then be necessary in order to quantify the side effects, either as a basis for determining appropriate monetary compensation to other stakeholders, or to determine the need for mitigating remedies.

Monitoring may be used as a quality tool in order to assure that the project has the intended benefit. In a recurring project, monitoring may be used to determine the timing of the next activity, e.g., the next dredging of a channel. The results may also prove useful for researching the regional sediment budget, and thus optimizing the future dredging activities. Finally, an operator may use auditable monitoring data as evidence that coincidental environmental impact that occurred during his project was not caused by spill from his project.