Starting in 2017 all SediMeters measure the turbidity by two different methods, straight and oblique backscatter. This has two effects, first an increase of resolution to 0.5 cm, and second that there are two kinds of measurements that behave in different ways in some cases: When it comes to measure moderate levels of turbidity they will give near identical readings, but when the sensor is blocked by the bottom they may differ a little, and when exposed to air, they will differ a lot. By plotting the two channels in color, as if it were a color photo, we create a color image with 0.5 cm resolution. 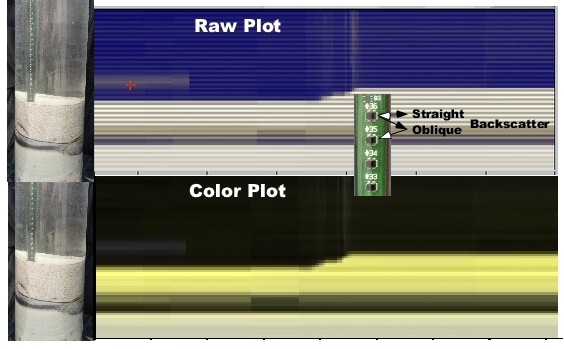 The color plot is created from the raw plot in an analogous way to how a color image is created from the raw sensor data. This creates a two-channel image with 5 mm resolution, where straight backscatter is represented as yellow and oblique backscatter as blue. A big advantage of this is that air becomes clearly identifiable since it becomes blue.