Before a SediMeter is shipped it is run for a while in stand-alone logging mode, and in real-time monitoring. This screen capture shows one such logging test file, for instrument SM3A-0041. It was inserted in a tank with Formazin that had been settling for a while, which explains the higher turbidity in the lower part of the sensor. The turbidity sensor mounted 11 cm higher up than the main array (“Turbidity (FBU”) was passed by the top of the main turbid cloud soon after the logging started. 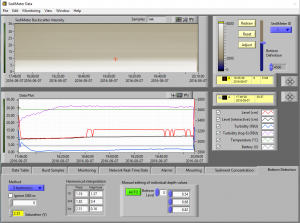 In the following two delivery tests, the instruments were placed next to each other half submerged in the Formazin tank. 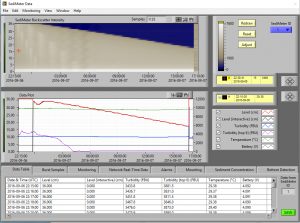 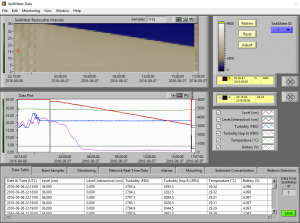 Note that the top of the Formazin cloud is visible as it settles. In the early part the two instruments are causing interference one with the other since they were synchronized and adjacent to one another. The separate turbidity sensor was in air and it’s value only represents the backscatter in the sensor air interfase.