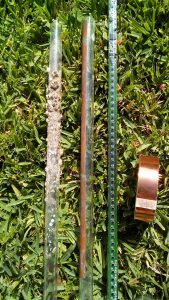 The main role of the SediMeter sensor is to measure the bottom level, in order to quantify erosion and sediment accumulation. The SediMeter sensor consists of optical backscatter detectors mounted inside a tube. They emit light through the tube and measure the reflected light. Obviously, the tube has to be reasonably clear for this to function. When the instrument was invented this was not an issue; one could just paint the sensor with transparent TBT-containing anti-fouling paint. However, due to its extreme toxicity TBT has long since been banned (except for in some sensors where it was grandfathered in, but the SediMeter is not one of them). Therefore much of the R&D in Lindorm over the last 10 years has been devoted to finding alternative solutions. The first somewhat workable solution was a mechanical cleaner; however, anything involving moving parts in a liquid full of sand is prone to failure, plus it uses a huge amount of power relative to the rest of the instrument. So we kept looking.

During 8 weeks in May to July of 2017 we deployed two SediMeters with copper tape on the rear side of the holder tube in Biscayne Bay, 1 m depth, next to a reference instrument. Both the taped instruments provided usable data for the entire period. With useable we mean that the bottom level could be determined with confidence. As a comparison, the reference instrument was completely covered in barnacles except for just above the bottom. In fact, the bottom level could be determined on that, too, but it might require more experience. We can therefore say that the fouling problem is solved; however, we will not stop this R&D. We have a new transparent anti-fouling paint to test, and we will continue developing the UV light for protecting the turbidimeters. 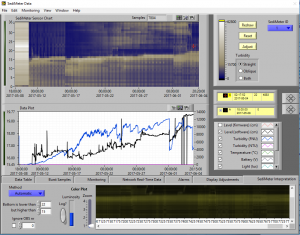 After a few weeks the fouling of the copper-protected instruments stabilized as sea urchins regularly grazed the algae.